80/100 (Metacritic)
70/100 (IGN)
4/5 (TouchArcade)
Plague Inc. is a strategy/simulation game released in 2012. It was released on iOS, Android, Windows and Windows Phone. The primary concept of Plague Inc. is to infect the entire world with a chosen disease type, while both focusing on wiping out the world with said disease, and fighting obstacles, such as a cure becoming developed for it, or the countries' governments trying to stop the spread of the disease.

The game has experienced popularity increases depending on disease outbreaks, an example would be when Plague Inc. was #1 in Japan, it was correlated with outbreaks of bad flu. Another example would be that there was an increase in players when the Ebola outbreak started in 2015.[1] Following the 2022 Monkeypox Outbreak, during the course of May of that year, it was reported that several players were naming their plague "Monkeypox".[2] 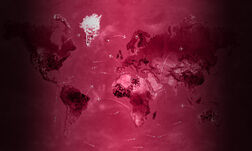