Fake News is a scenario added to Plague Inc: Evolved and Plague Inc. in the Mutation 1.17 update, announced on the official website's news.

The Fake News manifests as Bacteria with costs no longer escalating per purchased trait nor with Mega-Brutal settings. Natural disasters and transport shutdowns are disabled.

To begin its spread, one has to specify a topic, a starting party, a motivation and a blamed party, all of which are free and have different effects on Virality and plausibility. Only 1 of each per category may be chosen, while the starting party and blamed party cannot be identical.

Working similar to its original counterpart, Virality directly relates to the spread velocity of the Fake News.

A critical victory condition, Plausibility determines how likely would people be deceived instead of being informed.

A secondary stat that must be maintained at high levels to ensure victory. Community is inversely proportional to the possibility of deceived people becoming informed.

Various art concepts regarding the icon of this scenario[1] 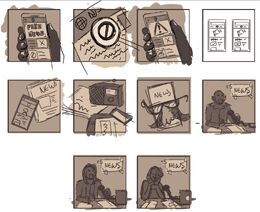 For strategies how to beat this scenario, check out the Strategy Guides/Fake News section.