Difficulty is a feature in Plague Inc. and Plague Inc: Evolved that alters gameplay according to difficulty. If you beat a plague on any difficulty, all the previous difficulties for any scenario or plague type will be registered as beaten as well, indicated by biohazards. Some features are locked until you beat the game in the required difficulty (and above). For example, you can beat Bacteria on Brutal instead of Normal to unlock Virus.

Casual is the 1st and "easy" difficulty, and is for those wanting a quick or easy game. It is the minimum to unlock a random gene of the Genetic Code respective to its plague type. In it, people are extremely lax. People do not wash their hands, doctors don't work, and sick people are even given hugs

Normal is the 2nd and default difficulty, and is the minimum for unlocking the next standard plague type. In this difficulty, more people wash their hands, as well as doctors contributing to research.

Mega Brutal is the 4th and "very hard" difficulty. Introduced in Plague Inc: Evolved and later added in the Mutation 1.8 update for the mobile version Plague Inc., this difficulty can have slightly longer playtime, and doctors can and will discover a disease without symptoms. Doctors will then stop at nothing to cure diseases.

Casual is the 1st and "easy" difficulty, and is for those wanting a quick or easy game. In it, people listen to experts, aware of fake news, and countries cooperate to eradicate the disease.

Normal is the 2nd and default difficulty. people are still aware of fake news but politicians are dumber and hospitals are not as prepared

Brutal is the 3rd and "hard" difficulty. Brutal introduces obstacles such as fake news, politicization of science, and even arresting experts who report on the disease. 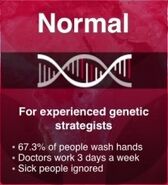 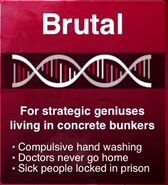 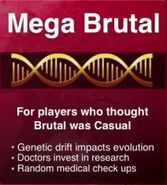 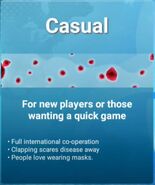 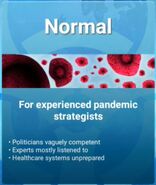 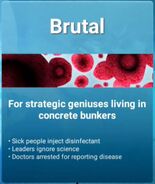 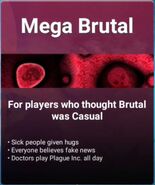