DNA points allow to evolve different traits such as abilities, symptoms or transmissions. These are obtained by clicking on the red and orange bubbles. They can also be obtained automatically through high rates of infection or death, depending on the plague.

The following genes will, if added to the Genetic Code, give extra DNA points in various ways. They must be "discovered" by playing the game before becoming available for use.

These genes modify the DNA cost of most abilities in different ways. They must, again, be "discovered" before they can be used. 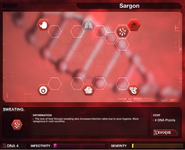 Plague Inc: Evolved showing what will happen if sweating symptom is refunded.