Cheats are abilities, not traits, that can be enabled in any combination, allowing for 2^7 different combinations, or 128. All cheats are usable by all standard plagues, special plagues and scenarios.

Each cheat option has biohazard markers indicating which difficulties of which it was beaten, just like the Scenarios and other Standard Plagues and Special Plagues.

Although the cure is being developed, the cure never finishes. This is done by the cure requirement increasing as more cure progress is completed

Governments will never research cures or close borders or ports.  Like the Immune strain, the only way to lose is by killing all victims without infecting everyone first.

Grants "∞" DNA at the start of the game. Can be used to determine how to unlock symptom combos.

The value granted may be 9999 in Plague Inc. Evolved.

The starting country will immediately be completely infected.

All evolutions are randomly shuffled in all possible trait spots.

Start the game with 5 random evolutions (Can't be devolved), and act as if they were normally purchased, and lead to adjacent traits.

Allows the disease to start in two countries. 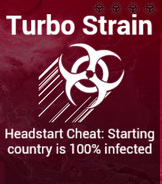 Retrieved from "https://plagueinc.fandom.com/wiki/Cheats?oldid=49906"
Community content is available under CC-BY-SA unless otherwise noted.