« Bio-Weapons are organisms or entities that replicate inside their target host and can be used to kill or incapacite. They are prohibited under international humanitarian law and deploying them is a war crime. »
— Description of Bio-Weapon in Plague Inc.: The Board Game

The Bio-Weapon is a genetically and biologically engineered and modified virus that was accidentally released from a laboratory. It is the final Standard Plague available in the game. It is quite similar to other diseases, primarily the virus standard plague type in physical appearance and in shape and size. However, unlike the previous plague types, the Bio-Weapon will grow progressively more lethal over the course of the game, making it more likely to kill off one's hosts before they are able to infect more people and causing quick detection. To win, the player must use the disease's special abilities to lower the lethality in order to avoid killing too many hosts too early. This quirk makes the Bio-Weapon ideal for speed run strategies, similar to Nano-Virus (cure starts at the beginning of the game). The interface of the Bio-Weapon also very strongly resembles an RNA Retrovirus.

Similar to Nano-Virus, the Bio-Weapon is a powerful yet artificial engineered entity. Seemingly behaving like a Virus, Bio-Weapon does not feature escalating devolution costs nor excessive mutations from DNA fragmentation. A key feature of the Bio-Weapon is that its lethality will increase passively throughout the game. By default, the Bio-Weapon has slightly higher infectivity than usual, and is better suited to rich countries than average.

Every in game day, the game will roll a random chance for the Bio-Weapon to increase lethality naturally. As the game progresses, the chance of lethality will increase exponentially. Nucleic Acid Neutralization will reset the exponential growth rate to zero, Gene Compression reduces lethality growth, Deactivate Modified Genes removes set amounts of lethality. 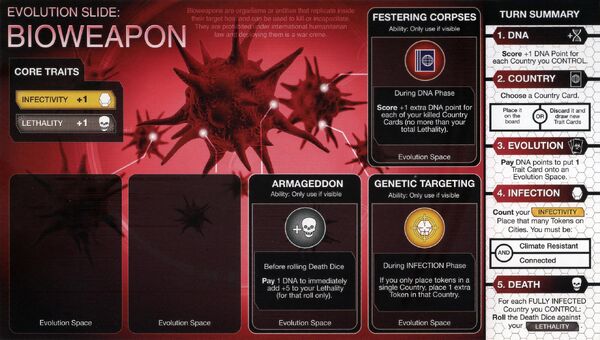 Bio-Weapon Evolution Slide in the Plague Inc.: The Board Game 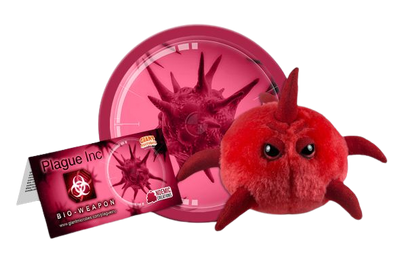