« Pathogenic bacteria are a major cause of human death and disease. Typically a few micrometres in length; they are extremely adaptable and can spread rapidly. »
— Description of Bacteria in Plague Inc.: The Board Game

The Bacteria is a standard plague. As the first plague type available to choose, it possesses all normal abilities, symptoms and transmissions.

The bacteria don't have many strengths or weaknesses in the Main Mode, this type of disease has extra abilities that help it spread in certain environments. This type of disease has no problem spreading through land, air or water, although it requires the evolution of certain transmissions in order to propagate quickly. The bacteria may sometimes mutate a few symptoms from time to time as it has a default mutation of 0.5, although the player can increase it through transmissions.

The bacteria can be easily traced as it presents obvious symptoms and does not require testing. This type of disease has no special operations, nor does it have many strengths so it is easy to treat and cure, unlike the other plagues in this mode.

The special ability for Bacteria is Bacterial Resilience, which raises its survivability and effectiveness in all climates. It does not give Drug Resistance and the boost is worse than those provided by Cold/Heat Resistance individually.

The bacteria is a pathogen that can adapt in almost all environments, so the player can start in any country and wait for the world to become infected, although some are more recommendable such as South Africa and Saudi Arabia, the ports and airports of these two countries are used by many people from different parts of the world, so it helps to spread the disease quickly, alternatively, the player can start in Egypt and use the insect transmissions.[2]

It is possible that the player in the early game has to devolve mutated symptoms, at least symptoms with certain severity or lethality. Having mutated symptoms early in the game may cause people to detect the disease and try to cure it when it has not yet spread effectively throughout the world. In addition, evolving air and water transmissions is important to spread the bacteria, and depending on which country the disease started in, one should use climate resistances, in other words, if the player started in a country with a hot climate, the disease will have an effectiveness bonus for these climates, but would have to evolve cold resistance to be able to adapt to other countries with different climates. When all island nations have a considerable number of infected, it is advisable to evolve Necrosis or Total Organ Failure.[2] 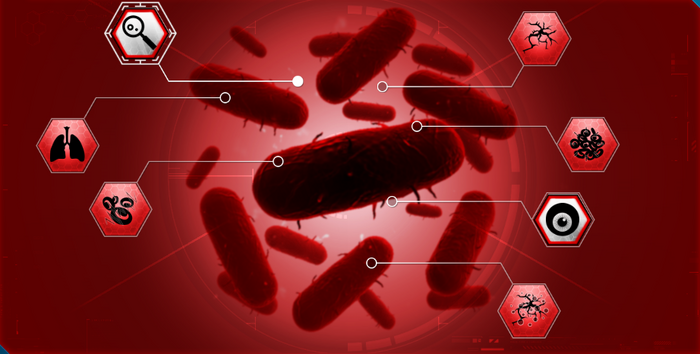 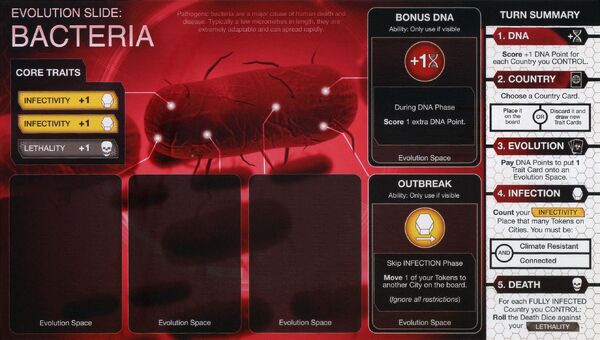 Bacteria Evolution Slide in the Plague Inc.: The Board Game