Apes are protagonist entities in the Simian Flu.

Apes are primates and viable hosts of the pathogen which, while extremely harmful to humans, has mostly beneficial effects to Apes by increasing their intelligence and granting them various improvements, hence forming a symbiosis between the two.

Unlike Vampires and Zombies, Intelligent Apes are mostly passive and peaceful, usually only responding to human aggression against them instead of promptly attacking everything alive. However, Ape aggression will prompt equally destructive human responses. They are not as powerful as Vampires or Zombies on their own, being weak even with all possible improvements, and hence rely entirely on the pathogen's lethality for them to eventually outnumber humans, rendering them the dominant species on earth. 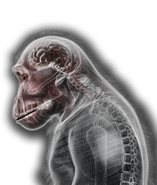 An ape before infection 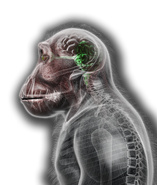 An ape after infection 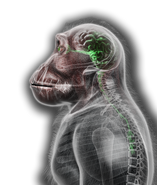 An intelligent ape beginning to stand more upright
Português do Brasil
Community content is available under CC-BY-SA unless otherwise noted.